The train takes about an hour. We had the seats at the end of the train car and there was a space behind our seats for people to stand. We had this guy behind us for the entire ride and he was eating some food right next to our head and making all kinds of noises. I put my noise cancelling headphones on and ignored him but Diem wasn’t able to avoid him. We arrived around 1:30 at Kaohsiung main station and made our way to our Airbnb place.

The apartment was a 5 minute walk from the Formosa MRT station which is just 1 stop away from the train station. One of the reasons we wanted to come to Kaohsiung was because of the Dome of Light ceiling at the Formosa, MRT station. The Dome of Light is the largest glass work in the world. It is 30 meters (about 99 feet) in diameter, covers an area of 2,180 square meters (about 23,500 sq ft.), and is made up of 4,500 glass panels with different illustrations for different sections.

The Dome of Light was designed by Italian artist Narcissus Quagliata and took nearly four years to complete. It depicts the story of human life in four chronologically arranged themes: Water: The Womb of Life; Earth: Prosperity and Growth; Light: The Creative Spirit; and Fire: Destruction and Rebirth. The overall message is of love and tolerance.  It’s a really beautiful piece of artwork and a popular spot for weddings and pictures and definitely worth a trip.

We got to our apartment around 2:30 PM and the host met us there and let us in. It was really hot and humid when we got there, 89 degrees with a 101 heat index. The apartment was pretty nice but the AC was not as strong as we would like. We showered up and went out for some food. We’ve really lucked out in our different apartments that we’ve stayed at because right downstairs from us was this restaurant that was set up buffet-style but we selected which items we wanted paid per item. The food was delicious and there was a ton of variety, I got some pork belly, sliced pork and chicken, and some veggies. We basically relaxed in the AC until about 7PM when we decided to hit up the Liuhe Night Market which was about a 5 minute walk from our apartment. We’re becoming old hands at Taiwan Night Markets but this one differed from the other ones we went to because this one focused mainly on seafood. Lots of live shrimp and prawns, the biggest oysters I’ve seen in my life, lobster and a weird lobster like creature. The vendors would cook the seafood you picked for you right then and there. We weren’t really that hungry since we just ate at 4PM but I got this this sausage wrap and some Turkish ice cream. Diem got tea ice cream. It was still damn hot and humid so we went back to the apartment and enjoyed the AC and went to bed.

The next day I went for a run along the Love River.  The river had walkways along both sides that were scattered with these lovable bears and different statues or paintings that were love themed. The Love River is the spine of Kaohsiung, playing a similar role to the River Thames of London. The Love River Park runs along the riverbank in downtown Kaohsiung City. A night market operates in the park, and there are three outdoor cafés, often with live bands. Boats which hold about fifteen people take tourists up and down the river. There are some attractive city structures near the river, such as the Holy Rosary Cathedral, Kaohsiung Bridge, and the Kaohsiung District Court. Cultural events such as concerts and the Lantern Festival are also often held by the river.

The main reason we were going to Kaohsiung was to go to the Fo Guang Shan Buddha Memorial. There’s a bus from the Kaohsiung High Speed Rail (HSR) station that goes to Fo Guang Shan but be careful, some of the buses don’t go all the way to Fo Guang Shan and we unfortunately got on one of those. The bus dropped us off at E-Da World which is like a Six Flags/Disneyland of Taiwan. We got on the right bus about 30 minutes later and the bus dropped us off at a Fo Guang Shan stop. This is where the language barrier almost cost us big time. We weren’t sure if this was our correct stop but we heard Fo Guang Shan so we got off. We saw a giant Buddha and assumed this was the place we wanted to go. As we were walking around we were surprised that there weren’t many people here since we heard that Fo Guang Shan was a big tourist attraction. We took about an hour to walk around the entire campus. The Giant Buddha and the Main Buddha Temple were the highlights.

It was cool to see the monks walking around and apparently there are other Fo Guang Shan temples/monasteries around the world. We just missed the bus back to Kaohsiung, and we were talking about how the stop didn’t seem to be the right location from the pictures we saw when we were planning this trip. While we were waiting for the bus back, we saw the bus schedule and saw that there was a Buddha Memorial stop after the Fo Guang Shan stop we were dropped off at. We figured that that was the actual stop we should have gone to, we walked about 5 minutes down the street following signs for the Buddha memorial center and saw the entrance and were immediately relieved. Turns out we were at the Fo Guang Shan Monastery and not the Buddha Memorial.

We saw the 8 pagodas and the giant Buddha that we remembered from our research in the distance. The Buddha Memorial Center is a mix of Chinese and Indian architecture, the 8 pagodas representing Chinese and 4 stupas representing Indian. Moreover, the 8 pagodas represent the 8 stages of the noble eightfold path, and the 4 stupas the 4 noble truths. I really like how the 4 stupas/truths surround the Buddha and the 8 pagodas/steps lead the way to the Buddha. It was a little weird to see a Starbucks, a high end restaurant, a hotel, and other shops in the entrance to what I thought was a sacred temple/memorial but when we walked through the hallway and saw the entire memorial, we were stunned. The view is really something, we had a beautiful clear day and it is really hard to describe so I hope the pictures do the Memorial some justice. The temple was conceptualized by Hsing Yun and construction started in 1999 and took 9 years to complete. I was really struck by the beauty of this place and I can’t stress enough that this trip is worth it. It’s only a 30-40 minute bus ride from the Kaohsiung HSR station. The Memorial Center is free to enter and explore. There are also free 50-min tours are also provided daily by the BMC International Team if you register ahead of time. Again, it was a really hot and humid day and we can see our skin getting darker despite the sunscreen and hats so we called it a day after only about 1.5 hours at the center. We really should have spent the entire day there (which was our intention) to explore the Center. 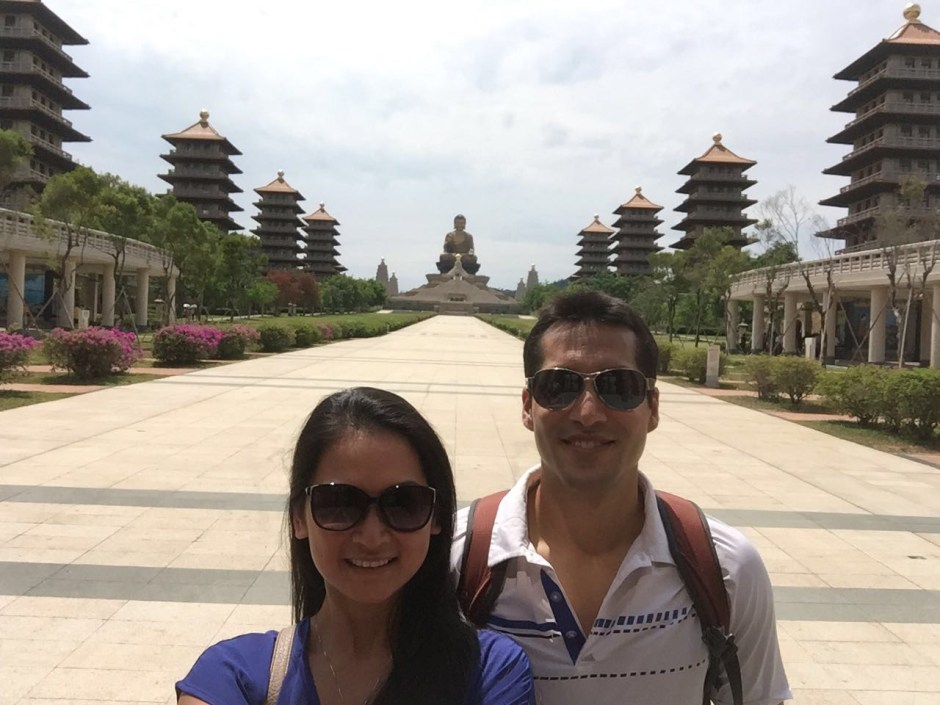 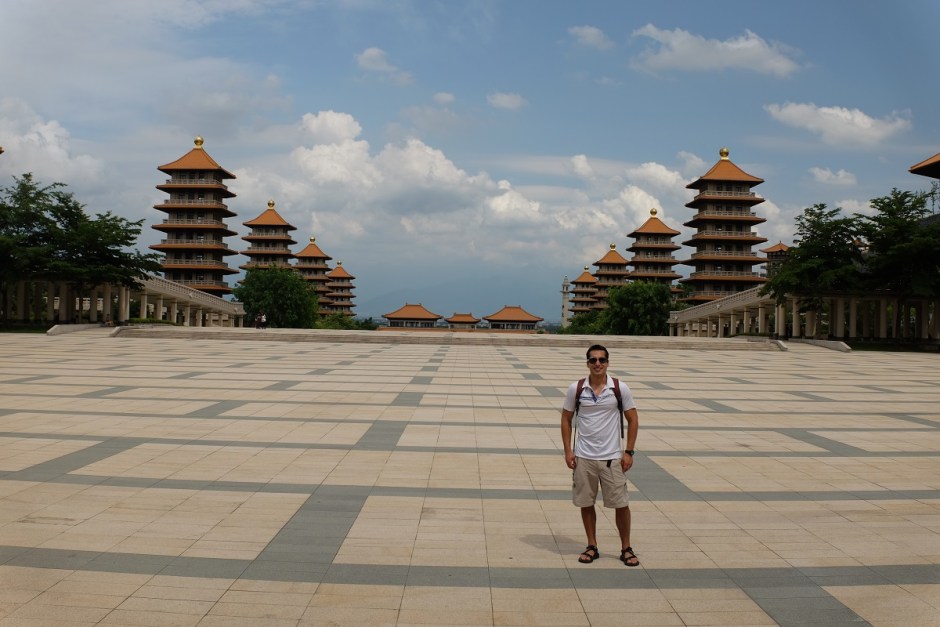 Facing away from the Buddha

We got back to the apartment around 3:30 PM and grabbed some more delicious food from the restaurant downstairs. We really wanted to see the Kaohsiung Lotus Pond and we heard it closed at 6 PM so we took the MRT to the Ecological District stop and then grabbed a cab to the Lotus Pond. The pond is a pretty big body of water that has a couple of piers extending out from the sidewalk and at the end of the piers there are some different statues and pagodas at the end of them.

The statues range from some colorful dragons, a giant Buddha, and various shrines. The pond had huge water lilies and a cool looking hotel along the waterfront. We read a post from another travel blog that said they were at the lotus pond for 4 hours  and they only got halfway around. I don’t see how that’s possible because the pond isn’t that big. We made it halfway in less than an hour and we were walking slowly and taking pictures along the way. The pond does not actually close at 6 PM and the piers actually light up at night. We got dinner at the night market again. Diem got some razor clams and a giant oyster. I got a mango ice cream with some fresh mango chunks. It started raining and we ran back to the apartment.

Even though the heat is pretty terrible and I only imagine gets worse later in summer, I really enjoyed Kaohsiung. There are trails along the river and up in the hills for runners to explore. The lodging is incredibly affordable ($13/night). The food is delicious and you can get some pretty amazing seafood. There are a number of beautiful sites around Kaohsiung that are easy to get to via MRT or taxi. It is a growing, modern city. We saw lots of construction around the city and there seemed to be an emphasis technology.  All in all, Kaohsiung was my favorite place in Taiwan. I think we could have used a couple more days there to explore more of the city and the southeastern tip of Taiwan.