Our first trip outside of the Kanto region was to Hakata/Fukuoka on the western side of Japan. The train ride from Tokyo to Hakata with a layover in Osaka took us 7 hours, which was good to catch up on some blog posts. We got to Hakata and checked into our apartment and it was completely filled with Pokemon gear.

Diem found a sushi spot around the corner for dinner. After some disappointing sushi experiences in Tokyo, this place had the best sushi that we’ve had so far. It was so fresh, well prepared, and served with a fish head and cool presentation. It was a great intro to Hakata and we just went to bed after that.

Our first full day, Diem was recovering from a cold I gave her in Tokyo so we just got lunch at a nearby restaurant and we went back for a nap. We were meeting Diem’s friend Rudi later that night so we were a bit limited on where we could go for the day. Rudi got in around 6:30 PM; he lived in Sasebo about 1.5 hours away so it was nice of him to make the drive to meet us. He’s actually been to Hakata a good amount of times, he said about once a month so it was nice to have someone show us around. He took us to the Tenjin area with a lot of restaurants and bars. We headed to a restaurant that he’s eaten at before and got some more great sushi with a fish fried rice dish. We saw this giant jar full of bees in liquid and asked the bartender what it was. He said it was a drink, so Rudi ordered one. The bartender then came out with two different jars, one filled with bees and the other filled with honeycombs, apparently there were two types of drinks. 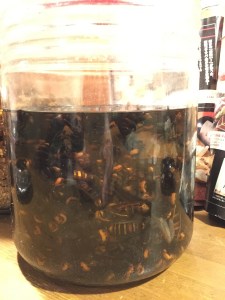 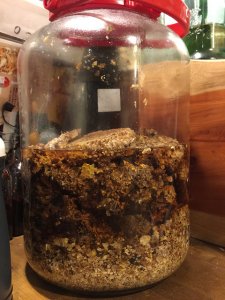 Rudi ordered the drink with the honeycombs for himself and the drink with the bees for me. When they brought the drinks out mine had a giant bee inside and the waiter told me not to eat it. Rudi asked if the drinks were “oishī” (delicious) and the waiter said that Rudi’s drink was oishī but mine wasn’t. I actually didn’t think my drink was that bad. It wasn’t good but it wasn’t as strong or as bad in taste as absinthe. Rudi’s drink tasted like a strong sherry to me or other desert wine. After dinner we felt like getting French fries so we found a place nearby and got some fries, steak, and more drinks. After that, we went to a third bar and grabbed a round of beers. We decided to get a shochu bottle from the convenience store and go back to our apartment. After a few more drinks, we all passed out.

The next morning, we got up late. Rudi and I were a little more hungover than Diem since we had the bee alcohol. Rudi had to get his car looked at by a mechanic so we grabbed lunch near the mechanic before he headed back to Sasebo. We tried this ramen-type dish called champon, which apparently is a regional dish of Nagasaki. After lunch, we went back to the apartment but struggled to get motivated to go out and see something. We didn’t want to completely waste another day of our JR Pass so we decided to go to Nagasaki. I had wanted to go here to see the atomic bomb museum and the peace park. I also heard that Nagasaki has an amazing view of the harbor and its skyline at night. However, when we got to Nagasaki, it was rainy and hazy so we wouldn’t see a good sunset or a view of the skyline. We walked down to a park around the harbor and then headed back to the train station to go back to Fukuoka.

The next day, we decided to go to Nanzoin Temple in Sasaguri, Fukuoka Prefecture that is about 30 minutes from the Hakata station in Fukuoka. Nanzoin Temple is a large complex with many chapels and shrines scattered over the hillside. There is an impressively large Fudo Myo-o statue (see above) as well as 500 statues of the Buddha's disciples (arhat), also an Inari Shrine and a shrine dedicated to the Shichifukujin, the seven lucky gods of Japan. This was a very cool complex tucked away in the hills and very peaceful. It strikes me as a great place for Buddhist monks or meditation retreats. There is also a very large reclining Buddha, which is pretty impressive but we’re starting to a little over-exposed to giant Buddhas by now. Afterwards, we went back to Fukuoka for lunch before we took the train to Sasebo to visit Rudi. We originally thought that Rudi and I would go play golf during the day but the weather forecast was pretty rainy so we decided just to meet him for dinner. We grabbed some Kobe beef steaks from the grocery store along with some veggies and beer. We had a nice home cooked meal, had some drinks and played some Call of Duty and FIFA. We also may or may not have ordered Dominos for late night munchies.

The next day we traveled to Kyoto. I didn’t know much about Fukuoka and the Fukuoka Prefecture before we went and much of our time there involved drinking and recovering so I can’t say I learned all that much about the region. Recently there was an article saying that Fukuoka is the 7th most livable city in the world. I can definitely see that. Fukuoka is a pretty large port city, it is less expensive than Tokyo, it’s pretty easy to get around the city, and there are a lot of great sites and cities nearby in western Japan. I think Fukuoka deserves another trip. There’s still a lot for us to see and explore but I’m glad we got a good taste of the region.